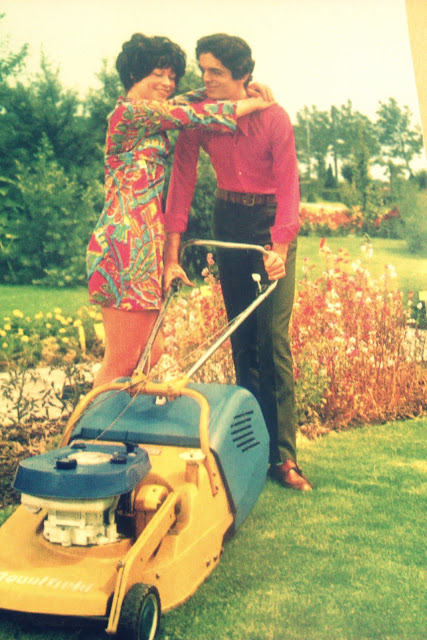 Its official. The sunshine is out in Staffordshire. Craig is playing cricket and I am left to play house! 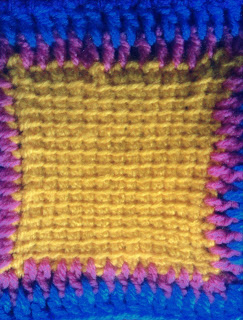 I woke up and immediately finished of adding my blog blanket squares before sending it off the the next lucky recipient.

My friend Nicky at our knitting class did a lovely purple square which matched Mum's. As it was a blog blanket I wanted it to have snippets from things I have blogged about. So I used wool left over from my happy birthday bunting and did the centre of the square using Tunisian Crochet technique.

Last night was my brother in laws birthday. It was his extra special 21st and it was the official grand revealing of the birthday bunting. Everyone loved it. Tonight we are going to an Indian Restaurant with all the family to celebrate.

Laurence is the most extra special 21 year old. He has Down's Syndrome and is the most special man in the world. Happy Birthday Bruv! He got spoilt rotten with a holiday on a cruise, an ipod and a Wii (he is moving into independent living this year sometime so he got very spoilt!). He is crazy mad about snakes and me and Craig brought him a B movie about a Boa and a Cobra who fight lots ..... hmmmm, horrible. However I can honestly say it was his favourite present. When anyone asks him what he got. he says the DVD .... and a cat!!?? He he!

Back to the sqaures;

Here are the three squares together ... a little bit of a strange combination at the moment, but once everyone adds their own colours and ideas I think it will be the most splendid techni-coloured dream blanket! 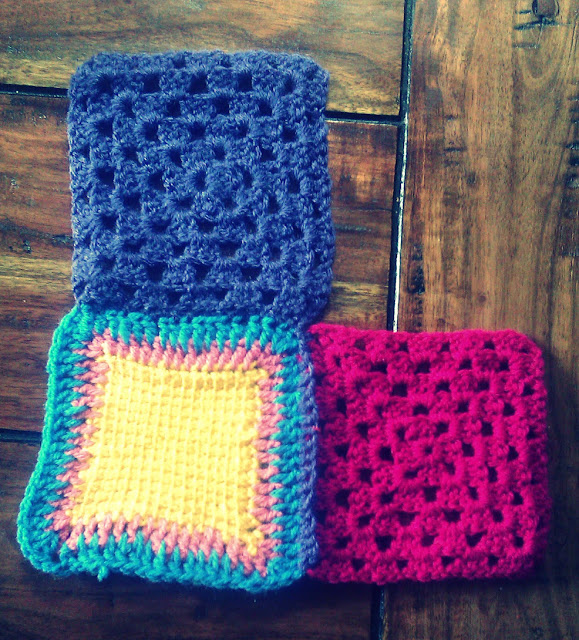 The second thing I couldn't wait to do was get in the garden. The front bed was very over grown with remnants of wild geraniums, wiry poppy stems and straggly forget me knots. I had a real good cut back. Then got a bucket of chicken poop and mixed it all in to the soil (let me add at this point, this does not make an attractive plot, but after a few days the soil is rich beyond belief).

I then scattered some Aqualegia and Poppy seeds with a little wish of hope for next year and turned the soil again.

Then I started planting. I put in four geraniums, six fucia's and four unlabelled plants that were getting sold of at Wilkinson's. I paid a grand total of 30 pence for them all and am absolutely certain that a few of them will take .... with a lot of TLC of course.

I also planted some freesia shoots that have been promising to break out for a few weeks and I felt they were finally strong enough to make it on their own in the big bad world of a garden bed.

Its looking pretty weird at the moment, with lots of cut back shoots, chicken poop and half dead plants .... but give me three of four weeks .... I'll surprise you!

In the mean time, here is a shot of how the garden is looking at the moment. The is the view from the kitchen window .... excuse the mess! 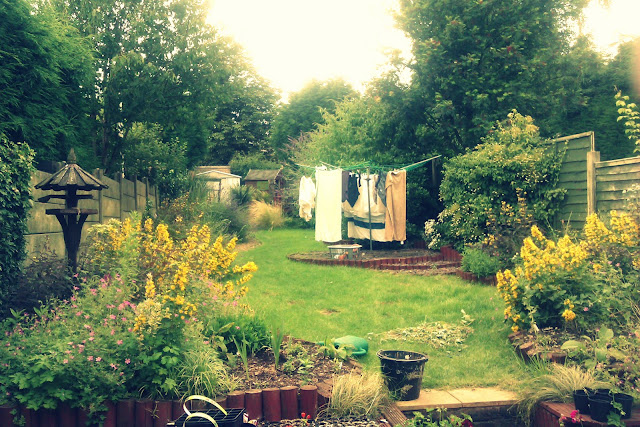 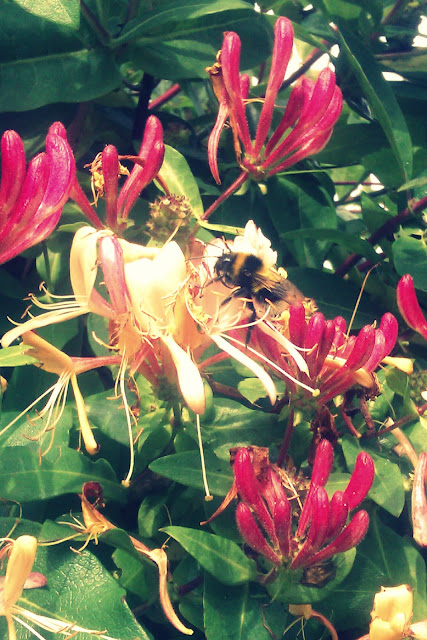 I have also cheered the place up a bit with a lovely Campanula in a tea cup on the conservatory coffee table, 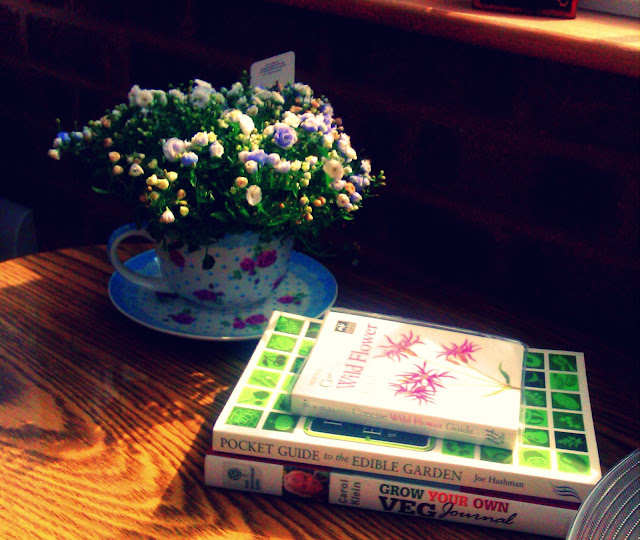 and a vase of purple and yellow goodness out of the garden. There seriously is anything more satisfying that having fresh cut flowers in your house .... never mind from your own garden! Ahhh bliss! 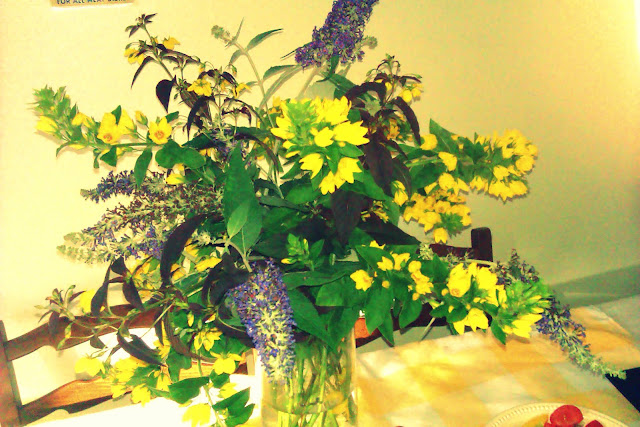 Now I am going to enjoy a late lunch of sausage and onion sarnies (must be the lack of BBQs this year that makes me crave a hot dog!) and am going to crack on with my special Olympic themed project .... more on this Friday for when the Olympics start! Can't wait! 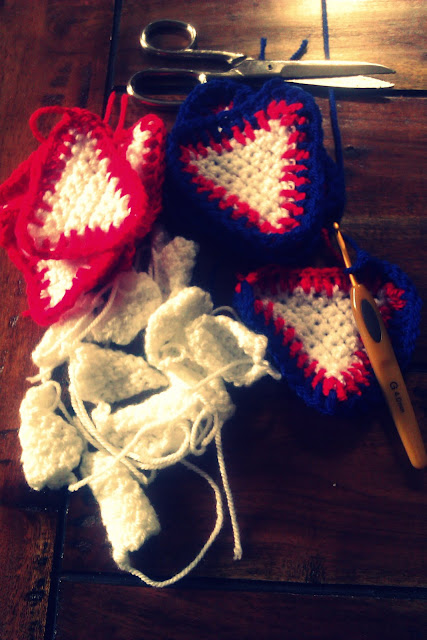 I will leave you with a collage of garden photos from this morning. 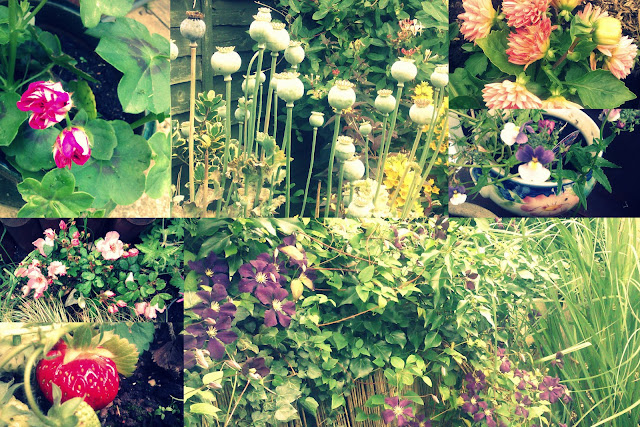 Email ThisBlogThis!Share to TwitterShare to FacebookShare to Pinterest
Labels: Crocheting, The Secret Garden

Thank you so much for your comments! I always read them and will be sure to check out your blog. Kate x